Father Charlie was known for his giving spirit, and because of that, he could not be trusted with the detention students.

On one Saturday in, I believe, my first year at Holy Trinity, Father agreed to come and monitor the Saturday detention.  The handful of students were being punished likely for tardies or some other bad habit. Father showed up with his usual smile and greeting and breakfast from McDonald’s for all of the “prisoners.”  After that, we got someone else to watch Saturday detention. It was, after all, supposed to be a punishment.

I was able to experience this giving spirit of Father’s first hand.  Father Charlie lived in Salado and made it known to me that I had an open invitation to bring the family there for lunch.  He would treat us at the Stagecoach Inn. Knowing that he was on a fixed income, I always felt bad accepting this generous offer or turning it down.  I know he appreciated the companionship. He took delight in talking to children and hearing about their day.

One Saturday during the Christmas break, I thought of a way to visit, but also to turn down the offer of lunch politely.  I called Father and told him we would be passing through Salado on our way to Round Rock to go Christmas shopping at the outlet mall.  After that, we would be headed to Victoria to see my family.

We stopped in at his trailer beside St. Stephen’s and had a pleasant visit for half an hour or so.  Before we left, though, he gave me a book–nothing special, just a book that he thought I might like.  He also gave each of the children a white cardboard box that had a study cross in it. We protested, but he insisted, saying he wanted to give us the crosses.  We thanked him and went on our way.

On the way to the outlet mall, one of the kids opened the white box.

One by one, they all opened their boxes, and in each one there was twenty dollars.  Then, my lovely wife opened the book, and we found an envelope with five more twenty-dollar bills in it.  My plan had backfired completely. He didn’t buy us lunch, but that day, Father Charlie gave us $200 plus crosses and a book.  Of course, I thanked him when we got back from the break. He said, “Well, I knew you were going Christmas shopping, and I thought you could use it.”

I’m not sure I’ve ever known anyone who gave so frequently and without concern as to his own well-being. 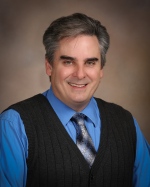 Chris Mosmeyer has been a member of the Holy Trinity family for 18 years. He has taught English, Speech, Journalism, World Geography, and Drama as well as coaching the Forensics, Speech, and Debate team. He served as Holy Trinity’s principal from 2010-2012 and is also the proud father of two Holy Trinity alumni and one current Holy Trinity student.

The Torch was designed to be a place online where members of the Holy Trinity family could connect with the school and each other. But to be really successful with this goal, we need your help!